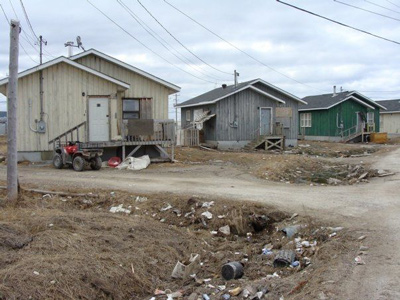 I get shivers just thinking about Attawapiskat. Shivers as in cold and damp. The Indians of that community may have a long long history of living out there in the elements near James Bay, but I just can’t believe that makes it any more pleasant.

This really is one of the big problems with communities like Attawapiskat, isn’t it? If they could build houses like normal people do, insulate them and keep them warm like (most of) the rest of us, there’d be a lot less to complain about.

But as I said, that is just one of the problems. There’s no doubt that aboriginals have a claim to something – some level of support from the rest of us. They were not “defeated in war” like so many Canadians, operating under the influence of American westerns, seem to think. Europeans just moved in and took control. No wars. No defeat. And certainly not in the James Bay area.

Even in the 1600’s, 1700’s, and 1800’s the occupiers recognized that the native tribes had some claim to ownership, sovereignty, and special treatment. How else can you explain all those treaties where “the crown” committed to honour the lands set aside for the indians, and to provide some degree of sustenance and education?

Those who say Canadian indians should not have any special consideration are simply not being realistic, and certainly not consistent. If you own a patch of land along with 5 or 6 friends, your group has special privileges vis a vis that land. One of those special privileges (at least in most jurisdictions) is ownership of resources taken from that land, or at least some sort of fair compensation for those resources. One of the important long-standing complaints of Canadian indians is that those privileges have not been adequately recognized.

On the other hand, I harbour no illusions that the probems are this simple. Indians already receive compensation in the form of significant tax exemptions, and outright grants for personal and community expenses. And it is difficult to deny that indian reservations are not shining examples of entrepreneurship. Any experienced homeowner understands the difficulties involved in keeping a house in good repair – especially in cold and damp conditions. But the state of repair of buildings in many indian reservation communities is beyond the pale. What is missing? Not enough money? No pride of ownership? Lack of paint?

I think the story of Attawapiskat and the “hunger strike” of Chief Theresa Spence will be a watershed for many Canadians. We can see the problems, but we are getting tired of what appears to be an irresponsible attitude to the use of funds made available for these communities. We would like to see a bit more evidence that indians are trying to help themselves.

Galup recently did a survey to find where the ‘ happiest ‘ people live and guess what; most of them were found in poor countries The top 7 were in Latin America . Why ? They found pleasure in their simple lifestyle . Same deal for the Indian [ er sorry aborigine ] . They have it made in James Bay because not only do they get to do hunting and fishing as their work , but they get a fabulous subsidy from the dopes living in the cities. I draw a parallel between teachers and Indians . They are concerned with one thing and it has nothing to do with getting a raise . The oldest con around is that you would complain a whole lot in hopes that the status quo remains. In the resulting foofarah, the actual mechanics of their situation will get lost in the resultant endless rhetoric about how the ‘ children will suffer ‘ or about how these people had a gun put to their head and were forced into virtual slavery by those bad old white folks , knowing full well that the deadly combination of white guilt and Presbyterian do goodism makes it a cinch for them to continue the game .
As the old Chinese proverb says ‘ You can give her / him a fish for one day or teach them to fish for a lifetime of eating fish . Maybe their historical forefathers had a point there.