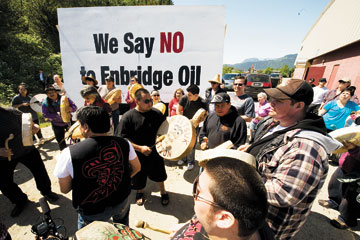 No one familiar with the Enbridge pipeline proposal should be surprised that First Nations groups affected by the proposal have banded together to oppose it. The proposed pipeline would carry unrefined bitument from the Alberta oil sands across the Rocky Mountains to the town of Kitimat on the Pacific Ocean.

Alternative route to move oil sands oil
The bitumen would then be loaded into super tankers and shipped down the coast and out to the Pacific on its way to the United States and Asia. Most tar sands oil is now sent to the U.S. via pipelines running south from the Fort McMurray area. Enbridge is already a major player in the Canadian oil pipeline industry. They have recently opened two other pipelines to carry Alberta oil. The industry (and government) objective is to stay ahead of the production curve to provide pipeline capacity in anticipation of increased production when, and if, it happens.

In fact it has been argued that overbuilding pipeline capacity drives crude transportation costs so high that it almost forces oil sands companies to ramp up their production even further. Enbridge’s “Gateway” proposal (to Kitimat) will just further the significant growth of oil sands development. 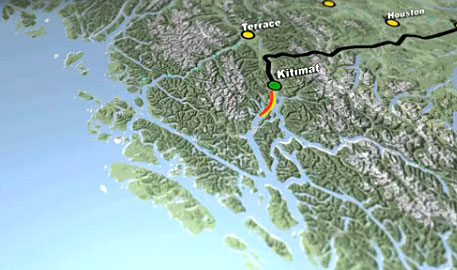 One consideration behind the proposed Kitimat pipeline is the diversification of the customer base for Alberta crude. The vast majority of oil sands oil is now piped to the U.S. But increasing investment in oil sands projects by countries like China, Thailand, and Korea makes it clear that there is an almost unlimited market for Canadian crude in Asia.

This is what is driving the push for a pipeline to the Pacific. Government and industry planners see this as an important area of growth for the future. All that is holding this development back is the difficulty in getting oil sands oil to the coast.

Environmental dangers for the Pacific Coast
First Nations opposition to the Kitimat pipeline is based on a number of concerns which focus on the environmental and cultural impact of such a large project. Of course there is the danger inherent in having a pipeline running through the mountains in the relatively harsh climate of central British Columbia. Enbridge’s case for environmental responsibility has not been helped by recent pipeline leaks in the U.S. Those were Enbridge pipelines.

But much more central to the First Nations opposition is the potential for damage to the uniquely delicate Pacific Coast habitat. Kitimat is not sitting out on the Pacific Ocean. In order for tankers to reach the open sea they have to navigate relatively narrow and treacherous channels between islands.

Shipping already takes place into and out of Kitimat harbour, so it’s not as if the coastal waters are not navigable. But super tankers are another story altogether. Fresh in the minds of coastal First Nations is the Exxon Valdez spill of 1989. The damage to wildlife and coastal habitat was significant and long lasting. Some areas of the affected coastline are still recovering, and local First Nations’ settlements will never be the same.

This is why more than 60 First Nations groups have banded together to oppose the Kitimat pipeline project.

Well to all of you canadians I can say I am glad I dont live in Canada. If you ask me there shouldn’t be any piplines at all neither drilling for petrolium.