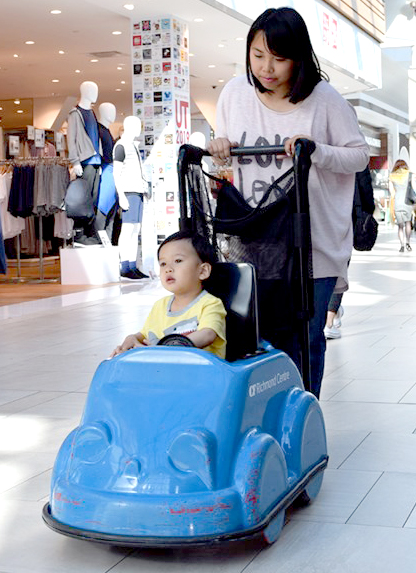 Today when I went thru the outside doors to the food court at the mall, I heard this odd whirring sound up ahead. It was clearly an electric motor, but I couldn’t remember hearing it before.

Hearing loud noises at the food court is not unusual. Young kids seem to like the echo and hearing them yelp out loud and (sometimes) cry is a common occurrence. There’s also one food place in particular that is almost always super noisy. I think it is the french fry place chopping up potatoes, but I couldn’t say for sure.

But today’s whirring sound was unusual. It was coming from up ahead of me, and seemed to be moving towards the food court as I headed in that direction.

A few minutes later I solved the mystery. It was a young boy of 8 or 9 sitting in one of those little car strollers. The kid’s mommie was pushing him around while he (quite aggrevatingly) pressed the button or pedal on the car that created a simulated revving motor sound.

Aha! Here was little Billie learning to pointlessly rev his motor. Just like the older boys who drive past our corner. Sometimes it’s a motorcycle. Sometimes a pickup truck, and sometimes a deliberately noise-enhanced Honda or Toyota.

When I hear this sort of thing I ask myself, “Why do young guys do this?” Why do they deliberately disturb the neighbourhood while drawing attention to themselves?

I’ve seen and heard this so often that I would be being disingenuous if I pretended to not know the answer.

Because the answer is simple: they just do. They like drawing attention to themselves in this way because they think they look (and sound) cool. They are showing the rest of us how awesome their stupid Honda is, and in the process building up their own self image.