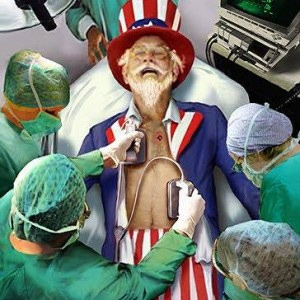 Canadians are a bit dumbfounded by the convoluted process involved in grappling with the current US debt ceiling crisis. Americans are being told “your government will run out of money if we don’t solve this problem” (raising the debt ceiling). So what results is brinkmanship and potential paralysis if the two (three?) sides can’t agree before some magical deadline.

In the Canadian parliamentary system a party governing with a clear majority in the House of Commons would just pass legislation to get the job done. That would be that. Given the weak structure of our Senate there is very little anybody could do about it.

I’ve read commentaries that say this demonstrates the superiority of the Canadian system. But I think exactly the opposite is the case. If you know anything about British constitutional history you will know that the supreme power of parliament has devolved from the supreme power of the monarch. Four or five hundred years ago a British monarch could more or less do what he or she wanted (levy taxes, wage wars, raise armies, create nobles, build castles, etc., etc.) That power was gradually wrested away from the monarch and vested in Parliament.

This demonstrates both some of the strengths and some of the weaknesses of an evolved system of government like that of Britain (and by extension, Canada). On the plus side such a system retains continuity with the past and knows what has worked and what has not. On the negative side it is very difficult to modify or get rid of traditions or assumptions (the absolute power of the ruler, for example) that may not fit current conditions, or are no longer morally justifiable.

The founders of the American system obviously worked within British traditions, but they were intent on rejecting the arbitrary power of the monarch. Given that starting point they gave themselves a more or less blank slate. If you know a little bit about American history you know that the balance of opposing powers was viewed as a critical component of the system – necessary for not letting any one branch or section of the government become too powerful.

The current debt ceiling crisis demonstrates the way these counter-balancing elements within the U.S. government work. The President does not have the power to simply do what he pleases (unlike the Canadian PM in a majority situation). There must be agreement between the President and Congress.

But getting the approval of Congress requires satisfying two different “houses”, which, in this case, are controlled by different parties with what seem to be radically different points of view. And even more confusing, one of those houses – the House of Representatives – is controlled by a party (the Republicans) that is seriously split between traditionalists and a more radical “change” oriented group.

What we have seen over the last few weeks is how the American democracy works. A relatively small group of radicals (The Tea Party Republicans) have tried to stand by their principles – the ones they were elected to promote – and in so doing have thwarted the apparent will of the majority.

But not really, since ultimately the majority has gotten its way. Furthermore, the compromise that has emerged is probably fairly close to what what most Americans can agree to.

Unless you are died-in-the-wool “majority rules” true believer, a compromise like this seems like a pretty democratic result. The dissenters (elected by “the people”) have had their views taken seriously. The Republicans have made a strong case for their position and clearly defined their “bottom line”. And the Democrats have put forward the kind of compromise that can get enough support from moderate Republicans to get passed.

All in all, I’d say a pretty “democratic” process.

We can have cooperation between parties and houses but as long as the annointed one decides to stay in perpetual campaign mode no legislation can be passed , considering the veto power which he weilds .In the meantime democracy can be circumvented via absurd czar appointments and executive order proclamations. This should be grounds for impeachment . Good luck when the main stream media is totally in the tank for Obama .

I think that the Gov Gen can be persuaded by the opposition , at least in a minority situation , that the PM does not enjoy the ‘ confidence of the house’ and an election is called .