Home  »  Politics   »   Teachers biting the hand that feeds them 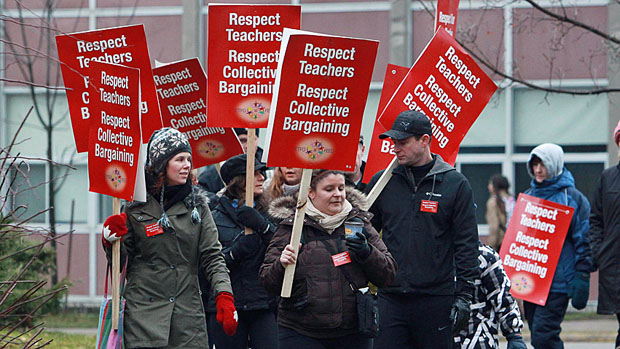 Last week when the Ontario Elementary teachers union called a wildcat strike, inconveniencing millions of Ontarions in the process, it was predictable what our weasle Premier, Dalton McGuinty would do.

Rather than confront the union and penalize them for holding an illegal strike, the McGuinty government put the case before the Ontario Labour Relations Board who, at the very last minute, declared the strike illegal. This gave the ever-compliant union members the chance to back down. Which is exactly what they did.

Meanwhile, schools that day were disrupted enough that they might as well have stayed closed. The teachers got what they wanted. But they stand to reap the whirlwind from this sort of action. Parents and taxpayers are fed up with this stuff, and all it will take is a government with enough guts to call the bluff of these union leaders and the whole thing will come crashing down.

As labour lawyer Howard Levitt has argued teachers in Ontario are already overpaid, work too few hours, and get pensions that are much too generous. All of this is because they have bought and paid for the McGuinty government.

The irony is that McGuinty – currently hiding behind his recent resignation and proroguing of Parliament – is likely to come out looking like the tough guy here who put the unions in their place. The reality, though, is completely the opposite. Public service unions (and public service agencies) cost waaaay too much, and politicians like McGuinty are the reason why.