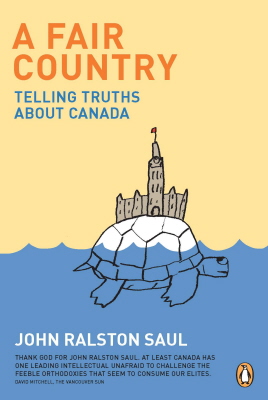 Over the last few days I’ve been reading the book called “A Fair Nation” by John Ralston Saul. The main argument put forward by Saul is that Canada’s development for at least 250 years after “contact” – the early 1500s when Europeans first started coming to what is now Canada – the territory that eventually became Canada was developed by a mutually beneficial alliance between French, English and Aboriginals (North American Indians/First Nations people).

Early on the relationship was one of mutual benefit between French and Aboriginals. This was a symbiotic relationship based on the fur trade and other commercial enterprises. The “Europeanization” of what was to become Canada was not primarly a colonization as it was in the colonies to the south. Rather, the commercial exploitation of the resources of the Canadian wilderness was dependent on the natives who actually did the work. Natives were partners in these commercial ventures, and their independence and autonomous status was taken for granted.

These commercial enterprises eventually came to be dominated by the Hudson’s Bay Company which operated as the government over much of the northwestern part of North America. Until the British defeat of the French in the 1760s there was little concern with reproducing French (or English) society in the Canadian wilderness.

The society that did develop there was born of a cross fertilization of European and native cultures. It was not – as so many of us have been taught in history class – a transplantation of English or French culture from Europe. This was an indigenous society in the sense that it grew out of the people and conditions of Canada itself. Canada was born out of the intermarriage of trappers, traders and local administrators with aboriginals. Our first indigenous (post contact) culture was in fact a Metis culture. And according to Saul this explains why we Canadians even today approach things in a different way from, say, Americans, British or French.

This strikes me as a very insightful analysis of Canadian historical development, and it goes a long way towards accounting for some of the unique characteristics of the Canadian point of view. Which characteristics? Our conciliatory nature, our anti-imperialism, our willingness to talk rather than fight, our appreciation for the complexity of society.

This is what I call our non-fundamentalist approach to life. Canadians generally do not assume they have all the answers, or even that the answers are simple or capable of being nailed down or settled by appeal to an overly simplistic rule like “the majority rules”. We generally assume that minority points of view should be heard. In our better moments we believe that dialogue, negotiation and compromise are the best way to solve disputes. According to Saul this comes directly from our indigenous, aboriginal roots.

If you are interested in Canadian cultural and political history this book is well worth reading.A Fair Country: Telling Truths about Canada. John Ralston Saul, Penguin, 2008