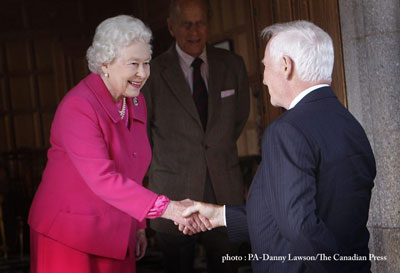 The failure of Canada’s political elite to cut formal political ties to Britain is an insult to Canadian independence and should be an embarrassment to all Canadians.

This once again became apparent in the installation of our new Governor-General, David Johnston.

Not that I have anything against David Johnston. He seems like a very nice man, obviously very accomplished in the things that matter for positions like this. His selection should please those who desire a change from the less traditional choices we’ve seen the last couple of times.

Yes, it’s also true that our outgoing G-G, Michaelle Jean, has at times been a breath of fresh air. But in practical terms I don’t think it much matters who occupies the position as it is currently defined.

Many people will say it’s not about “practical” affairs anyway. It’s all about symbolism. The G-G has no real power.

But that is not even remotely true. The office and the role are intimately bound up with our colonial history. Through conquest we became part of the British Empire and through political anachronisms like the office of the G-G we essentially remain captives of that past.

It is precisely the symbolism involved that should bother Canadians the most. It is the antiquated tie to the British crown that should rankle. This is an ongoing testament to our colonial past, our dependent status and our inability to grow up as a nation.

Calling Queen Elizabeth the “Queen of Canada” does not soften the blow one little bit. The British monarch is part of a hereditary class system that has no standing in Canada and that we should want nothing to do with.

Yes, I know many people have a deep emotional tie to the “Royal family” and especially the Queen. But think about it for a minute. Do these “royals” really have any relevance to the day to day lives of the vast majority of Canadians? Do we really want to be known as “the former colony of the British Empire”.

I don’t think so. It is time for our government representatives to complete the repatriation job begun back in the last century. That means, first, redefining the Canadian Senate so it has an important and meaningful role, and second, giving Canadians a head of state that is our own – one that does not belong to a foreign country.

James, I don’t think you even read my arguments. I’m glad you agree that we are “effectively part of the UK” whether we want to be or not. What you don’t seem to acknowledge is that our constitutional status came about through a series of accidents of history, that that history could have been different, and that there may actually be reasons for changing it now. Do you realize that the United States has an even greater claim than Canada to being part of the 1000 year old tradition to which you refer? The American colonies were British. Canada was initially a French colony and only became British when they “stole” Canada. So really, the continuity of tradition and culture to which you refer only goes back to 1763. And furthermore it was simply imposed upon us by the British. I’m not saying that is necessarily a bad thing. It is just an historical fact. Before 1763 the country we now call Canada had been established by the French, and (obviously) before that it had been occupied and “governed” (in an admittedly loose sense) by the indigenous peoples of the territory.

If a few battles had gone the other way in 1812 this territory would now be part of the USA, you would have served in the American armed forces, and you would be telling me how important it is to understand and respect the American constitution.

I agree with most of the great leaders throughout Canadian history, that it is possible to recognize and honour most Canadian traditions without assuming they are perfect or unchangeable.

Dude, we are a constitutional Monarchy. We have been for 1000 years (yes, we are effectively part of the UK). And we will be for the next 2000.

In fact, when the yanks stole the land from the King, many of them moved here because they were loyal to their people .

The ‘Queen’ is our head of state, and by definition has nothing to do with the ‘day to day’ affairs of any of the nations of the Commonwealth, not even the UK – the position exists by design to have someone live above the political fray. The Queen reigns over the entire commonwealth, not just the UK and Canada, as you can understand, she may seem remote, except that she is our leader.

Ask yourself the question: if Canada were incorporated as a ‘Shire’ or a province of the UK, with parliamentary representation – what would your argument be? Can you grasp the fact that cultural heritage is in fact as important as a legal or economic relationship?

Do you realize that you are speaking ENGLISH, that our entire worldview, our form of education, legal system, sense of morals and values derive from directly from England? Do you grasp that to a Commonwealth outsider you are probably 80% identical to a Brit?

You completely fail to grasp that ‘The Queen’ is not so much a person, it is a position. As a former member of the Armed Forces, I know the difference between rank – and personality. One can loathe the individual and respect the rank at the same time. The ‘rank’ of Queen is as high as it gets.

That the institution is heriditary is of course unfair in some ways, but validated in others. We Canadians have the cultural distinction and sophistication of farmers. We have little sense of intellectual vision, pride, we are completely naive in our worldview. The only Canadian PM that anybody has ever cared about in recent history is Trudeau – but he will be proven to be a disaster. I’m sorry that you can’t grasp that ‘upper class’ means beyond wealth. Nobility, in it’s real sense can only be imbued by one’s parents, and is in a very real sense, hereditary – moreover, the institution has been established in such a manner for 1 000 years, we’re not about to abandon it. Of course, they have reduced powers – which keeps them from doing anything to crazy.

Are you so shortsighted that you can’t even grasp the tangible cultural power of the royals? Do you realize that the recent wedding was THE MOST WATCHED EVENT IN HISTORY. Do you realize that Kate is now the MOST POPULAR PERSON IN THE WORLD? Would you rather that title go to someone outside of your clan? Do you realize that women all over the world are running to their plastic surgeon’s asking for ‘Pippa’s bottom’? Do you grasp what kind of cultural power that represents? I worked in marketing for a Fortune 50 brand. I can assure you that ‘The Royals’ are the most valuable brand in the world – by far – more than Coke, Pepsi, or Apple – especially for the leverage they give the UK and every member of the Commonwealth.

If you go about writing blog posts against ‘cowardly’ government officials while failing to mention the types of governments in question here, and without providing any reason for your position, your not putting yourself in a well-founded position.

To suggest that somehow our nation is merely an ‘operational collective of people who collect taxes to pay for the trash to be taken out’ is to completely fail to understand what a community, culture and nation are.

Queen Elizabeth has managed over 12 Prime Ministers, the first one being Sir Winston Chuchill. Thankfully, given the weakness of your arguments, she’s not at any risk from the likes of you.

YOU NEED TO IMMEDIATELY LEAVE THE COUNTRY – I’D SUGGEST YOU MOVE TO THE USA. Please, enjoy your McDonald’s, Disney, WallMarts and reality TV, obesity, high crime and violence, and concentration of capital in the hands of 1% who own 50% of the nations assets.