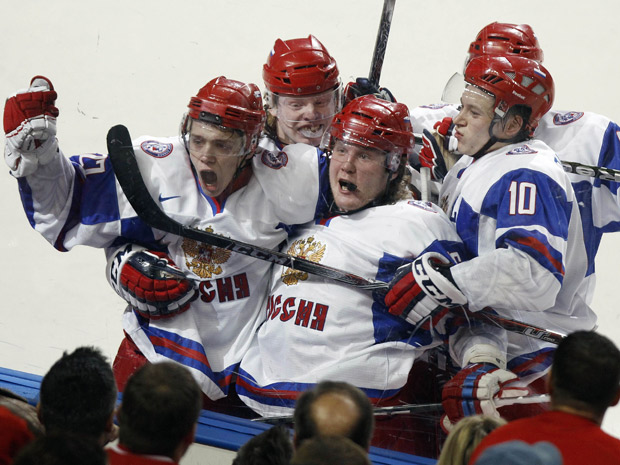 I’ve been in Florida for the last week and must admit I haven’t been following the Canadian sports scene at all. It’s a completely different world down here. TV coverage (at least where we’re staying) is good if you like “I’m 16 and pregnant” or long boring hearings on CSpan. Other than that, forget it.

I did hear that the Canadian Junior hockey team was playing Russia in the final (gold medal) game tonight. Eventually I found an internet radio station carrying the game. The Fan590 Toronto was not available directly because of cross-border restrictions. But I was able to get the same feed from Calgary.

At the end of the 2nd period the Canadians were cruising with a 3-0 lead. I fell asleep. When I woke up with about 10 seconds to play the Ruskies were ahead 5-3 – having scored five “unanswered” goals.

What a terrible way to lose. But not that terrible. Sometimes the puck just starts rolling for the other team, and we all know those pesky Russians can score in bunches. So another over-hyped international tourney is finished, with less than satisfactory results for Canadians. Nobody in Canada wants to hear this, but the truth is, it is probably better for the game that Canada not win all the time

It is interesting how much more popular this tournament is in Canada than in the US. In the semi-final between Canada and the U.S. there was far more support for the Canadians than the Americans – at a game in Buffalo, NY.

When I was a kid, living a few miles from Buffalo, it was a fairly significant US city. Not any more. Now Buffalo rides on the coattails of southern Ontario and Toronto for the little non-local exposure it gets.

Hi Chris,
I agree with your comparison to the women’s game. It is counterproductive to have every women’s hockey tournament turn into a showdown between Canada and the U.S. What exactly can be done about it is another question. Maybe Canada and the U.S. should focus on putting two or three teams together – getting more players involved at a high competitive level at the same time as evening out the competition with other national teams. Of course we wouldn’t win all the time.

This loss was devastating to our national psyche & pride but I do get your point that it might actually be a good thing for the tournament as a whole. If Canada won all the time I think there would be a drop in international interest. We are witnessing the exact same thing with Canadian women hockey. They say their dominating performance at the Van Olympics may cause the sport to be removed from the Olympics! But we have now lost two years in a row so let’s hope we take it in 2012.