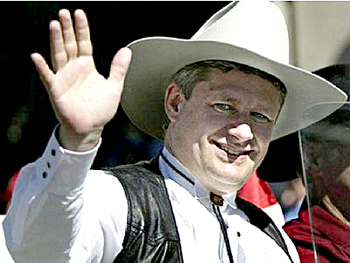 A few years ago it was not unusual to hear that leading conservative politicians in Canada were taking advice from U.S. Republican strategists – as though it was a big brother/little brother type of arrangement between conservatives in Canada and Republicans in the U.S.

This was especially the case near the end of Preston Manning’s run as leader of the Reform party – back in the days when conservatives in Canada were trying to break the lock the Liberal party had on federal power. That was before the Reform and Alliance parties merged to form the Conservative Party of Canada.

One of the things Manning admired about the Republicans and the “conservative” movement in general in the U.S. was how they had built a powerful set of “think tanks” and academic research groups to raise the profile of conservative ideas in the media, gain respectability for those ideas among intellectuals and elites, and develop strategies for getting politicians elected who identified with those ideas. They had, in other words, made conservatism both respectable and strategically effective.

After his retirement from party politics Manning went on to develop his own institute called the Manning Centre with a clear focus on promoting “conservative solutions to the challenges of our times.”

Conservative success in the U.S.

While this strategy worked remarkably well in the U.S., it did not fare so well in Canada. While it is true that the Conservative party of Canada has held onto power for the last five years, it is not as though this represents a revolution in Canadian attitudes. The population is split between left and right, liberal and conservative much as it has been since the mid 1960s.

Ironically, Canadians are more “conservative” than their American cousins, and less prone to jump on ideological bandwagons. So the rush to the right that took place over the last few decades in the U.S. was not replicated in Canada.

This demonstrates the confusion that exists over the term “conservative” and the differences between the Canadian and American use of the term. Many Americans (both pundits and ordinary citizens) have given the term “conservative” a hard, very definite edge, and act as though their own definition is both obvious and self-evidently rooted in historical usage.

The fact is, the term “conservative” has been used to describe many different political and social tendencies both in America and other countries including Canada, the U.K., the rest of Europe, Japan, China, and virtually everywhere else. In the U.S. the current crop of reactionary conservatives focus on a limited role for government in the affairs of individual citizens, a laissez-faire attitude to business, and the promotion of traditional “family values”, which in many cases includes specific religious values.

But this understanding of “conservatism” has not always been so dominant in American history. As Patrick Allitt says in his book The Conservatives – Ideas and Personalities Throughout American History,

Writers about American conservatism have often argued that the word itself has meant different things at different times and that there is no consistency in conservatives’ beliefs about what should be conserved… Arguments for the free market, for example, seemed radical in the era of the American Revolution, but arguments for the free market since 1917, when Soviet communism proposed a fully planned and centrally directed economy, have had a strongly conservative flavor.” (p.3)

In fact, reactionary right wing American conservatives of the last few decades have done a considerable amount of revisionism to make their ideology fit their interpretation of history.

Things are different in Canada

Certainly in Canada “conservatism” is understood differently. Partly because it stems from different historical roots, and partly because the rigid fundamentalism of reactionary American conservatism simply does not fit the Canadian social and political realities.

For example, I suspect most Canadians are like me when they try listening to the details of the recently passed “Obamacare” health care legislation. The convoluted gymnastics this new system goes through to appease business interests (insurance, pharmaceutical, etc. companies) is a wonder to behold.

The vast majority of Canadians simply accept that there are some things better managed by government agencies. This is not because we are in love with government. Rather, it is because we fear the alternatives are so much worse.

In that regard we are more “conservative” than our American cousins. Yes we have heard the ideological arguments for privatizing some or all of our health care system. But we are hesitant, for good reasons, to buy into them. We know that behind many ideological arguments there are people who stand to gain something at the expense of the rest of us – banks, insurance companies, drug companies, oil companies, medical services companies, doctors, lawyers. They are all there lobbying for a bigger piece of the pie.

Of course it would be too much to ask of doctrinaire freedom loving Americans to actually look at how our health care system works. They are too busy feeling sorry for us.