Home  »  Politics   »   Why Elizabeth May should not be in the debates 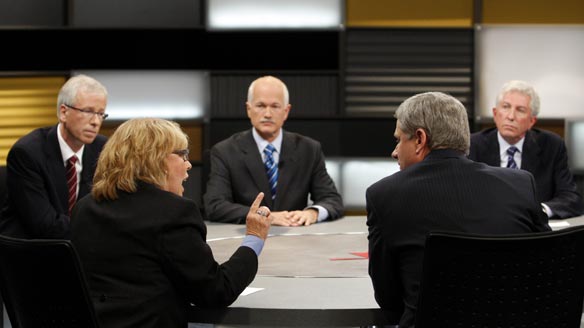 Everytime we have a federal election in Canada the televised debates become a focial point of the rather short campaign. As I’m sure you know, these debates feature the leaders of the major parties who have representation in the House of Commons.

Last time around (2008) Elizabeth May, leader of the Green Party was officially excluded from participating. But then a hue and cry from “the Canadian people” led the debate organizers (the major Canadian TV networks) to include her.

Of course you know as well as I do that the folks who support the Green Party are genearlly more vocal than your average Canadian, and they tend to have the ear of the left-leaning Canadian media. So it is not surprising that so many earnest Green sympathizers were able to sway the media panel.

This time around the same panel has excluded May again. And unless a larger dose of reality has set in than in 2008 there will be the same cries of “undemocratic!” from Green supporters.

IMHO excluding May is the right thing to do. Not because I don’t sympathize with “green” objectives, but because the Green Party under May have no one in Parliament. It’s pretty simple. That is the standard and May does not measure up.

If you recall, in the 2007 election May actually colluded with the Liberals (under Dion) to try to win a seat. She ran in Central Nova (Nova Scotia) against Peter McKay where the Liberals agreed not to run a candidate. In return the Greens agreed not run anyone against Dion in Montreal. Of course it didn’t work.

As far as I’m concerned May would be doing herself and the rest of us a favour if she just joined the Liberal party and tried to run for a party that actually has a chance of winning seats. The Canadian Parliament is already too splintered. A consolidation of parties on the left (if that is what the Liberals are) would make it more functional, more productive, and more representative of Canadian views on the large issues.

The same goes for the televised debates. A significant majority of Canadians want to hear the views of the leaders of the parties who actually have a chance to win. That does not include the Greens. Unfortunately for them – and any new party trying to claw its way to greater popularity – they have to present a platform that a large enough number of Canadians can agree with.

In other words, it is Canadian voters who have decided the Greens should not be at the debates.

Sorry if this repeats by Facebook sign-on. It didn’t appear to work.

Anyway, I just discovered your blog, and I quite enjoy it. That said, I disagree with your view on May and the suggestion that her party is fringe. I dispute your position on what the “standard” should be to appear in the televised debate. A seat in the house shouldn’t be the standard because this isn’t consistent with the standards Election Canada has set for funding.

I guess my argument is as follows:

1. Non-fringe parties have been invited to take part in a democratic exercise, a debate.

3. Therefore, the GP party should be entitled to take part in the same democratic exercise as the other non-fringe parties because like the other parties it is recognized equally by Elections Canada.

If we are going to use standards to make electoral-based decisions like this, at least we should do so consistently.

An good analysis of this problem is found in the following report:

Perhaps, but it is pretty effective.

He`s got a pretty weird golf swing as well ..

I thought we agreed on most things. It’s that German guy who is the weirdo.

As bizarre as this may sound, I actually agree with you. The Green Party has no official standing in Parliament. If the Green Party wants to debate with the big boys, go win a seat or two.