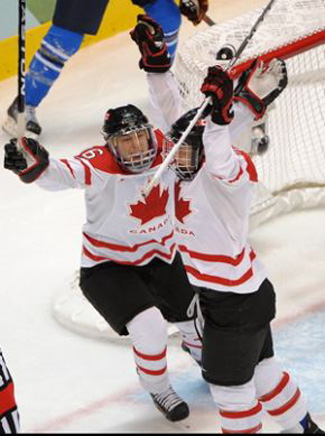 I haven’t bothered following NHL hockey for many years. I will occasionally watch a big game, like the final game of the playoffs, but not knowing the players makes it pretty uninteresting.

What impresses me when I do watch is the speed and skill of the players. Having been involved in kids hockey, I know how much training and practice these players get. And it really shows.

It shows at all levels. Three of our grandaughters play hockey and even though I can talk about playing out on the pond or creek from dawn till dusk when I was a kid, these girls know way more about the game than I did at their age. They can skate better and play the game better. So it is quite something to think how good at hockey (or any other sport they set their minds to) kids can get these days.

Anyone who knows sports will tell you there is a disparity between the average players and the really good ones. Always has been. Always will be. In most sports, and certainly hockey, it is “hitting” – physical contact that is the big equalizer. Sometimes the only way a less skilled player can stop a more skilled player is by knocking them off their feet.

Many hockey lovers have elevated hitting into an important skill, right up ther with skating, passing and puck handling. But when you spend any amount of time watching competitive hockey where there is no legal body contact you realize that hitting is not so much a skill as it is just a strategy for winning – a way of slowing down your opponent, or throwing them off their game.

I remember very vividly the year I was following a local team in the provincial playoffs. The other team had a really talented forward who was likely to take them to victory. One of our guys gave himself the task of “nullifying” that player. He did so with a vicious check that put the other boy out of the series, and our team went on to win.

But it’s not. Isn’t it interesting that most old-timers leagues do not allow body contact. Why risk missing work because of an injury? And then there’s girls who play without body contact and get along just as fine. The players are just as enthusiastic and have just as much, or maybe more, fun. And the games are just as competitive and entertaining.

So I think it is time to take a serious look at outlawing body contact – hitting – at all levels of hockey. It is not an important part of the game, and never was.

I may be failing to realize that kids aren`t able to make proper judgements , just yet. My comments are more appropriately directed at adults.

I think you are just using the catch-all term “nanny state” as a surrogate for “a more informed citizenry”. As people realize that violence in sports is just stupid and can result in needless injury the sports themselves (not the state) will make it unacceptable. This is driven by more informed fans, players, and, in the case of kids, parents.

I also do not watch hockey for the same reasons , probably for the same reasons . I don`t bother with ‘ reality ‘ shows or Dancin ` with the stars , etc. either . Too many blowhards doing their thing . But it seems , from my limited viewing , that hockey hitting has decreased from the bad old days of Shack , Kennedy , Ferguson and on and on . It is likely to be reduced in the future , as the nanny state continues to protect us from all evil , To me modern hockey has evolved into the humdrum and bland ; almost the perfect metaphor for what awaits these folks as they advance into the brave new world of corporate sameness and repetition .