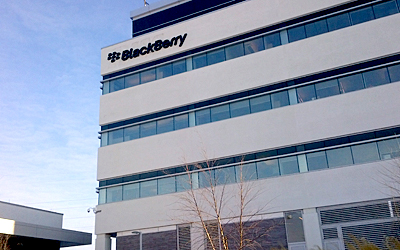 One of the many (formerly) RIM buildings in Waterloo.

BB10 was launched last week, and I noticed that very afternoon that the sign people had two new signs on the buildings down the street. RIM logos were gone, replaced by Blackberry logos.

Personally I think this name change thing is pretty unimportant. I guess it means there will no longer be confusion (if there ever was confusion) over just what “Research in Motion” actually makes. This represents a fusing of the company with the actual Blackberry brand.

The downside, it seems to me, is that it may appear to make the company a one trick pony – all smartphones, all the time – which I guess was the case anyway. But I suppose the possibility always existed in the past that RIM might have developed products or services other than phones. NHL hockey teams? Remote controlled cars? Manned space flights?

Not any more I guess.

BB10 and the future

But having said that, BB CEO Thorsten Heins has made a point over the last few months of emphasizing that BB10 is more than just another smartphone platform. It represents Blackberry’s foray into the brave new world of “mobile computing”. This apparently is not just a throw away term for the folks at Blackberry. The concept videos put together by Blackberry suggest a convergence of the smart phone with other devices you may currently be saddled with: laptops, tablets, desktop computers.

What is visualized is not just a convergence where these different devices can share files or even talk to each other in more sophisticated ways. Rather a process of elimination in which the desktop computer, the laptop and the tablet are replaced by a more powerful version of what we now know as the smartphone.

Importance of the OS

This is clearly why Blackberry has focused on building a more robust operating system for its phones. They are not just taking on iphone and android. These are important, but limited in scope. Their real target, I suggest, is to develop a practical, powerful alternative model for the whole area of personal and business computing – to essentially redefine personal computing as we know it – desktop and laptop computers. Which inevitably means their biggest targets are the companies who own the desktop: Microsoft, Unix, and Apple.

Over the last couple of years, the people who have led the discussion about RIM’s future have not been tehnical analysts. For the most part they have been investment analysts. And I don’t think they much care about actual technology. They see the nuts and bolts as relatively unimportant to regular investors.

Of course their job is to comment on stock value, and give some indication of how the company may do in the short term. They have been fixated on the way RIM stocks have lost value since 2010, and have focused almost exclusively on what the company has to do to revive the value of the stock.

Yes, it is true that reviving the stock is incredibly important for the long term viability of the company. The necessity of concentrating on short-term results is obviously a problem for publicly-traded companies. Shareholders want short-term gains. So, like politicians who are fixated only on winning the next election, company executives have limited freedom to dwell on the really big changes that may be taking place in their part of the world.

Under normal circumstances it is probaby not wise for a relatively small company like RIM to risk its successful past on a very uncertain course for the future? After all, predicting revolutionary change is one thing, but gambling on a specific technological development path in anticipation of that future is something completely different.

Risking the future on QNX

As many commentators have said, and as RIM executives have acknowledged, three or four years ago RIM had apparently missed the “consumerization” of the smart phone. After having essentially invented the smartphone, RIM had remained too obsessed with the way businesses and government agencies use it as a “messaging” device. When Apple turned it into an entertainment device for the masses, RIM fell badly behind.

Even at that time RIM chose to take what they seemed to consider the high road. They did not (apparently) see the way entertainment apps were kissing cousins of productivity apps. In adjusting to this new reality they resisted turning their devices into Apple clones. They visualized a different, more serious business-oriented future for the company and its products.

They could have chosen a less risky approach to its uncertain future. They could have simply decided to use the (more or less free) Android operating system for its future phones rather than spend years (and billions of dollars) developing something completely new.

But they chose the more difficult path because when all is said and done, they don’t see themselves as simply makers of phones (like Samsung or Nokia). They decided to develop a rival OS that would take on iOS, Android, and even Windows and Unix, at the same time as taking mobile computing in a different (more serious) direction.

The big move was the purchase of QNX in April of 2010, and the decision to use their software as the basis for Blackberry’s future. QNX software was already being successfully used in cars, industrial control systems, medical environments, defense systems and nuclear power plants. The decision to adapt QNX to the Playbook was made soon after the purchase, and that adaptation had already taken place within the next year. So much for foot dragging.

An OS that can expand

As Mike Lazaridis said at the time, “we believe the planned acquisition of QNX will…bring other value to RIM in terms of supporting certain unannounced product plans for intelligent peripherals.” What did he have in mind? Other than the Playbook and BB10 these other products and peripherals have not emerged.

Apparently what he had in mind is what Thorsten Heins elaborated on two years later, and what we see in the QNX/Blackberry concept videos. There we are asked to visualize a world in which desks and windows become touch-sensitive display devices interfaced with, and driven by portable hand-held devices like smartphones and tablets.

In this version of the future there are no self-contained personal terminals walled off from other devices with their own dedicated storage and processing capabilities. There is no distinction between your personal mobile device and your desktop. You simply place your mobile device in a cradle or on an activated surface and your desk (or monitor) becomes just another version of your phone.

This is an interesting and compelling vision for the soon-to-be future. Just think, you come home from a long day on the road or at the office. You plug your phone into a cradle on your desk and you have access to the same information and applications you’ve been working with all day. The same scenario in your car, at the coffee shop, or at your client’s office.

The problem with predictions is that they may turn out to be wrong. They can also short-circuit the present by enticing you to put off small developments for the sake of bigger future ones. This process is inevitable, and certainly happened to RIM leading up to the implementation of BB10. Enhancing an OS like BB7 would be counter-productive if it meant that BB10 would be further delayed. So at some point in time a company like RIM just has to bite the bullet.

All complex technological systems run their course. Back in the mid-90’s Apple was failing and had to update its operating system. They moved to a system based on NeXTSTEP, and eventually to OSX and iOS. About the same time Microsoft gradually moved from its DOS-based version of Windows to a more robust version initially called Windows NT. None of these moves was easy or without its problems. The same has been the case with RIM.

Blackberry has staked out a position on the “serious” end of the spectrum, where it really matters that their systems and devices do what they’re supposed to do – business, medical, industry, government. Will it be enough to cater to a more specialized market and leave the kids and other app-lovers to Apple, Android, Sony, Nokia, Samsung and all the others?

One thing is for sure: while consumer-targeted devices are becoming more sophisticated and more powerful, they are also getting cheaper. The profit margins are getting smaller and smaller, and the differentiation from device to device is disappearing as well. So we can expect brand-loyalty – one of the things that has fueled Apple’s remarkable success – to fade.

This has particular relevance to the future of the Playbook and other tablet devices Blackberry may be considering. If you watch the Blackberry concept videos you see Playbook-like devices looming large as the personal mobile device of choice for interfacing with all those futuristic virtual displays. But this vision of the future does not need a tablet to perform this function. It can just as well be handled by a scaled down device – like the BB Z10.

So in spite of the fact I probably use my Playbook more than any of my other computing devices – phone, desktop, or laptop, I think its future is bleak. I predict Blackberry will either replace the Playbook with a slightly larger version of the z10 – a phablet – or they will just back away from actual tablet production, and instead focus on developing the software. Before this happens they will find (or set up) a partner (or partners) to produce tablet-like devices running BB10. Tablets and other larger-than-phone devices will continue to be part of the Blackberry future, but will be only ancillary peripherals within a larger picture.

If BB10 sells well there’s a good chance the-company-formerly-known-as-RIM will be around to pursue its future, and we will see if some of those convergence predictions come to pass. Some of this convergence is inevitable. Smartphones are already sufficiently powerful to have become the web browsing, game playing, entertainment experiencing devices of choice for many people – especially those under 20. This shift has taken place in less than 5 years, so you can imagine how things are bound to change in the next five years.