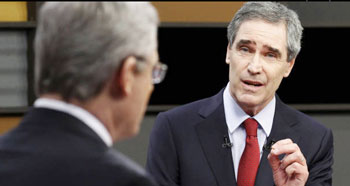 Watching the leaders debate last night (the English version) I had the distinct impression that Harper “won” – at least in the sense that he presented the strongest case for why the Conservatives should continue running the party. The only other credible alternative is the Liberals, and Ignatieff had a difficult time IMHO saying just exactly what the Libs would do if they were to form the government.

It is not difficult to see why people are ambivalent (or downright negative) about Ignatieff. He is obviously a very intelligent guy and could probably do a decent job as PM, but he just has a difficult time saying anything specific. Perhaps it is because he is an academic, who by nature usually don’t like to oversimplify things. So instead of suggesting specific things he would do if he was in power, he is big on vague proposals like the “Family Pack”.